Bob Campbell (United States of America) is head of Science Operations at the Joint Institute for  VLBI ERIC (JIVE).  BS in physics (Annapolis, 1983); AM/PhD in astronomy  (Harvard, 1990/1995).  Post-docs at the Air Force Geophysics Lab, NFRA,  and JIVE; in current function (modulo some minor re-organizations) since mid-2003.  Principal interests have included gravitational lensing, VLBI  astrometry/geodesy, ionospheric effects, AGN jet kinematics.  Served on  the IAU Division I working group for the ICRF2, and has been a member of the European VLBI Network (EVN) Programme Committee since 2006.   Plays viola in the Filharmonie der Aa (based in Groningen, Netherlands).

He leads the WP6 TA1 EVN; which has coordinated since the FP6 RadioNet programme (2004).  The principal functions include compiling access statistics (hours per participating station and observing  team members, for TNA-eligible and ineligible projects) and liaison with users (including prospective ones) to raise awareness of the opportunities  arising from TNA-eligible projects and to track down input from them after  their observation(s). 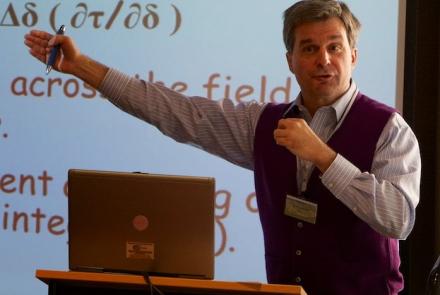