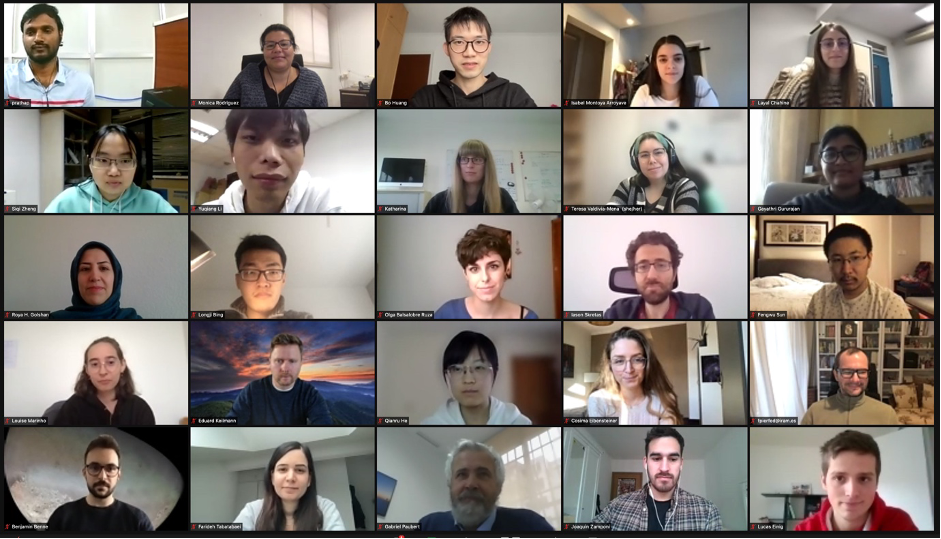 The ORP IRAM 30m School organised virtually by the Institut de Radioastronomie Millimétrique (IRAM) on 15-19, 22 and 23 November was a success with the participation of hundreds of students.

The School combined topics on (sub)millimetre astronomy with technical lectures on instrumentation, observing techniques, and data processing and, very importantly, with observations carried out at the 30m telescope: the students and trainers formed small groups to develop one science topic, preparing the science case, planning and conducting the observations at the telescope (in remote access mode) to implement the case, reduced and analysed the data gathered at the telescope and finally presented the results on the last day of the school.

Lectures were given by experienced scientists and observers, covering a wide range of scientific and technical topics. As usual, besides general areas of interest for 30m telescope users, lectures on a specific, hot topic were added: this year was devoted to the NOEMA interferometer, and in particular to the synergies between this facility and the 30m telescope.

The school was widely advertised, ensuring a world-wide visibility. In fact, 169 applications were received from 43 countries. Regarding gender distribution, 45% of the applicants were female and 55% male. Given the o-line nature of the school, all applicants were accepted for the lectures, while limiting the attendance to the practical sessions at the telescope to 60 students - 10 per group for six working groups. All the talks were recorded to allow deferred attendance, something useful given the wide range of time zones of the attendees.

Data reduction was carried out using the computing facilities at Pico Veleta, without issues. The presentations given by the working groups in the closing session were really outstanding.

The satisfaction survey among the participants was replied by 76 students. The feedback received was positive: the lectures got a score of 4.13/5 and the practical sessions got a score of 4.44/5. The experience with the on-line format of the school was also positively evaluated, with a score of 3.76/5, although the option of an on-site, face-to-face school was the preferred one (60%), vs. on-line (5%). The remaining 35% of the responders felt happy with either format.

The 10th edition of the IRAM 30m School was quite successful, in terms of response from the community, implementation and level of satisfaction of the attendees. However, it is also clear that the preferred format is the on-site, face-to-face one.